Any AUS or NZ company


deListed and InvestoGain acknowledge the support of ASX and ASA:

If you are going to need your money within a year or so, shares are generally not the way to go.

Your timeframe for investment should be at least five years and preferably seven years or more.  While growth assets, like shares and property securities, tend to have more volatile returns over the shorter term - meaning they are likely to produce negative returns more often than income type investments - they have the potential to produce higher returns over longer-term timeframes.

Note from the graph below that Australian shares lost ground over the period of two years to 30 June 2003 and indeed an “average investor” in international shares with a holding of $400,000 at 30 June 2001 had lost almost half of that three years later and at 30 June 2007 would still be almost $43,000 worse off.

The graph is a bit out of date but it highlights the point that investment markets generally move in cycles. These cycles reflect the strength of the economy, industry trends and investor sentiment.  So don’t get too carried away by the astonishing returns of a 3 or 4 year period nor the depressed state of the market over a similar period. Look rather at the long haul. 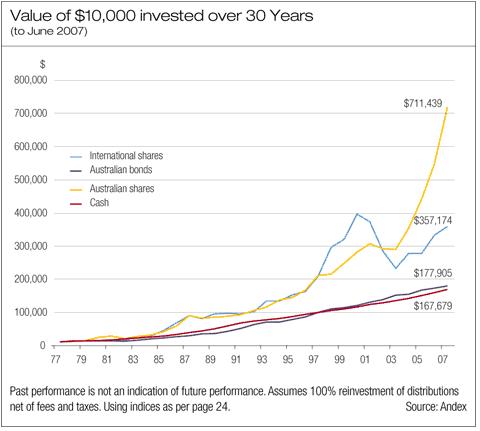